Inauguration of the replica of the winged bull of Nimrud

Appealing to the need to strengthen efforts to promote culture, not only as a cultural emergency, but also as a security and humanitarian imperative, UNESCO, Italy and Iraq inaugurated today the 3D replica of the Lamassu Statue of Nimrud.

“I cannot think of a more powerful symbol for this General Conference than this moment of unity. UNESCO’s position is very clear — anywhere culture is threatened or destroyed, we must respond with more culture, more knowledge, more evidence of the role of heritage for peace, with stronger efforts to protect it for future generations”, declared Irina Bokova.

In the Spring of 2015, the Statue of Lamassu, which once protected Ashurnasipals II’s North-West Palace in the ancient capital of the Assyrian Empire, was deliberately destroyed by ISIL/Da’esh. In response to the ruthless attacks by extremist armed groups suffered by Iraq in recent years, the Associazone Incontro di Civiltà, presided by Mr Francesco Rutelli, led the initiative to rebuild the Bull of Nimrud, with the support of the Fondazione Terzo pilastro – Italia e Mediterraneo, using 3D printing and robotic engineering.

The replica reflects the joined efforts of the international community in responding to these threats, which have recently resulted in the adoption of the historic UN Security Council Resolution 2347 (link is external), the first resolution to address exclusively the protection of cultural heritage in the event of armed conflict.

Following up on this resolution, an Appeal on “Protecting culture and promoting cultural pluralism: The key to lasting peace” will be presented at the Plenary of the Cultural Commission of UNESCO’s 39th General Conference by its Chairperson, H.E. Ms Vincenza Lomonaco. The appeal affirms that the protection of culture and heritage – both tangible and intangible – is not only a cultural emergency, but also a security and humanitarian imperative.

This message is embodied in the Statue of the Lamassu of Nimrued, which will be displayed at UNESCO Headquarters for the duration of the General Conference, standing as a symbol of the Organization’s commitment to share history and transmit the values it carries to future generations, before being offered to Iraq in solidarity with the Iraqi people. 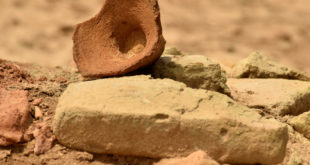